For better or worse the father of Thaddeus Duke, a living legend in his own right, is the right man for this job.  What job?  Training with his son once more, this time for the Lions Den match against Nathan Paradine at Genesis.  Thing is, Sebastian Duke is a rather busy man and can't just drop everything in order to help get his son ready.

Thad's motorcade slows to a crawl before the armored limousine makes a right turn off the busy street into the parking garage beneath Veneras International.  In front of and behind the Lincoln limousine is a small number of blacked out SUV's with flashing reds and blues.  Inside those cars are highly trained and heavily armed agents that have one purpose: protect Thaddeus Duke at all costs.

"For fucks sake, what do they really think is going to happen here?  My father owns this building."

Jim sits awkwardly quiet.  He wants to let Thaddeus vent, because that's all he really needs to do, but its important also, to keep the young man focused.  "Mate, they work really hard to keep you safe."  Thad looks over at Jim momentarily the back out the window as his guys step out of the elevator.  "I know its a proper pain in the arse, but it isn't them you should focus your frustration on."

The security team gives a thumbs up and the driver opens the doors for Thad and Jim.  In his heart of hearts, Thaddeus knows James is right.  It's been a trying couple months for Thaddeus Duke in a professional sense.  His falling out with the company he called home for several years, and his father, several years before him.  His efforts to financially back the Royal League fell on its face because the man that called the shots was a complete idiot and rather than sell out, he blew the whole thing up, in a manner of speaking.  Now, one of his new business partners appears to have some enemies and are trying to sink his latest business venture.

Minutes later, Thaddeus is pacing the floor in his fathers office, waiting for the man to show up.  When he finally does, it the greeting is less than cordial.  "I've been here for some time," Thad states, the frustration in his voice very much evident.

"Forgive me for taking lunch when you told me you were here more than two hours ago," Sebastian replies incredulously.

"You gonna help me or not?" Thad asks.

"Kid, what the fuck is your problem?"

"Boy, don't you sass me!  You've been here 5 minutes and I'm ready to send you out that fuckin' wimndow!  If you need help with something or you need to talk, I'm here for that, but don't stand here..." Sebastian comes nose to nose, or rather, chest to face with his only son.  All 6 feet 9 and nearly 300 pounds of him in Thaddeus' sface.  "Don't stand here pretending I can just drop everything on a whim.

"You've been flying by the seat of your pants for the better part of 2019 and if you had any sense of direction, any sense of reasonability, you'd stop hopping around from place to place.  Your team needs you to do better, Thad.  The Illuminatus needs you to do better."  The angered Sebastian Duke has backed Thaddeus to the large outer wall, which is really just a window of the office.  "Now what is it you want my help with?"

Sebastian Duke has a personal gym near his home in Arlington.  For this, he had some benches and machines cleared out in order to accomodate the presence of an Octagon.  The two Duke's enter the gym side by side wearing sweats on their fourth consecutive day of training.

"You ready to get your ass kicked?" Sebastian asks with a smile.

"The day you can kick my ass is the day I quit," Thaddeus replies jokingly.

Moments later, they're stripped of their sweats and both wearing their ring tights.  Both men have those padded fight gloves on their fists.  They touch gloves and immediately, Sebastian Duke is throwing hard rights and left into the body and upper chest and neck area of his son, backing him into the fencing.

"C'mon, you gotta do better than that!" Sebastian shouts after backing off.

"You caught me off guard!"

"It was time to fight!  You think Nathan Paradine is gonna give a shit like I did and back off because you were caught with your pants down?"

"That's my point!" he yells.  "Your ass better be ready to go as soon as the bell rings, or Paradine is gonna put you on your ass."

They go again, and this time goes just as the first, with Sebastian rocking Thaddeus.  It can be forgiven considering the size disadvantage that Thad has compared to his father.  Thad pounds the fence in frustration.  His father begins to speak but Thad shrugs him off, ready to go again.

Again, Thaddeus is rocked and this time taken to the mat.  Once again, Thad's frustration is evident as Sebastian lets up and Thad pounds the mat over and over and over and yells out at the top of his lungs.  He lies there in a heap on the mat, burying his head in his arms.

"Channel your frustration," Sebastian says quietly.  "Take all of the things your pissed off about: the XWF divorce, the Royal League and Pastor Dipshit, the hate and harrassment directed at your newest business partner.

"Take all of that, kid.  And you channel it into aggression toward me, toward Nathan Paradine at Genesis."

Thaddeus bursts from the mat, his face a crimson red.  All of the hurt, all of the frustration, all of the anger thats eating him up is finally allowed out to play.  He catches his father off guard and crashes him into the side of the octagon and delivers stiff body shots and uses his knees to hit him more.  Sebastian is finally able to shove him away.  Thaddeus hits the mat and back rolls back to his feet, quick anf nimble like a cat.

Sebastian charges across the octagon only for Thaddeus to roll underneath him.  Sebastian collides with the cage wall and Thad jumps up on his back and applies a rear naked choke.  Sebastian tries to fight him off, but is unable.  He starts fading and drives Thad back first into the octagon cage a couple times to no avail.  With Thad firmly attached to his back and with Sebastian fading faster, the elder Duke advances toward the center of the octagon and drives himself back first into the mat, but this is a mistake.  Thaddeus is now able to grape vine his legs around his fathers massive thighs.  The younger Duke is like a Boa Constricter as the 'life' drains from his father.

Satisfied, Thaddeus lets go of the choke and shoves his fathers half unconscious body off of him.  Out of breath, Thad lies there heaving, sucking air into his lungs.  "It's bullshit," he begins.  "The people in this industry that do most of their talkin' on Twitter."

Thad rolls over and gets himself to his feet.

"They hide behind their twitter handles and their keyboards and their computer monitors or cell phones and say whatever it is they want, slandering my company and my business partner over the vitriol they harbor for him.  It's disgusting, it's stupid, it's childish.

"Nathan Paradine, before I really begin, let me apologize.  Let me apologize because I have a LOT of frustration built up inside of me and its really itching to come out.  I can barely contain it any longer and at Genesis, Nate, I gotta let it out.  That doesn't exactly bode well for you.

"You got me on Evolution.

"I had your number all month but finally you were able to get a 'win' over me, no matter how insignificant it might have been.  Enjoy it, Nate.  It's the only victory you'll get over me.  It's the only time and the only way you'll ever claim you were better than me.  One time, for a few seconds, after having just had a match with Sean Fuller.

"I hate cliches, but I really am living in your head rent free.  I'm so up in your head Nate, that you ought to charge me rent.  See, I released a video hyping my debut and I never specifically mentioned anyone in particular.  Least of all, you.  But you got a bug up your ass because there's hype surrounding me.  People are interested in me.  They love and adore me and you can't take it.

"Jealousy is an ugly color, Nathan, especially on someone as accomplished as you are.  Yet you decided to interrupt my on-screen in-person debut and go into business for yourself only to get kicked in the face.

"When I'm in that ring, I own it.  It's my yard, my house, insert boring and played out cliche here that people have been using in every match in every company in the world for at least two decades.

"It's time you realize, Nate, that I don't care if you're jealous of me.  I don't care that you want this Lion's Den match.  I don't care about any of that.  What I do care about is respect.  You interrupted my debut to the Championship Wrestling Federation and that is blatant disrespect for me and my legion of fans the world over.

"I'm going to defeat you in the Lion's Den, Nathan.  And when I do, you're going to stand up like a man and shake my damn hand and show me the respect I deserve as a former champion in this business. By the way, if you DO manage to beat me... you won't, but still... I will shake your hand like a man.

"It's a moot point though, because at Genesis inside the Lion's Den, Nathan Paradine, I will prove that beyond a shadow og a doubt, that I am better than you." 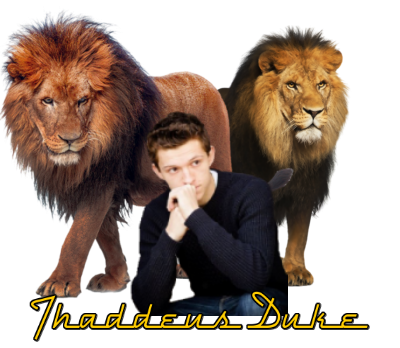