”New challenges.
Same results.
His glory.
His ambition.
His hunger.
All to what end?
The end of them?
His rise to prominence.
He becoming champion.
Him becoming the ALPHA!!”

Expanding his horizons… Glory still the Endgame… He will be ALPHA!!! 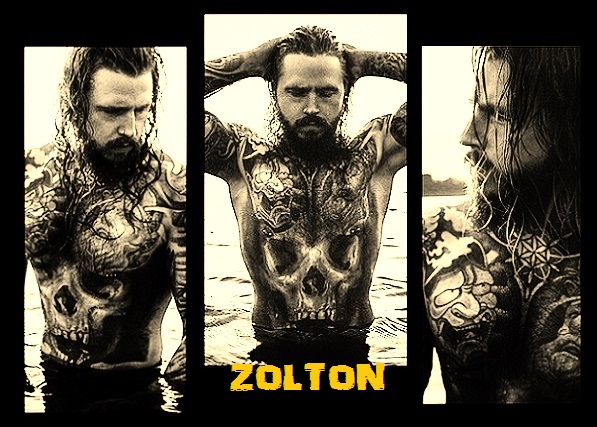 *Melissa Aki is seen sitting upon a lounge chair on the roof of the apartment she now shares with Zolton just outside the city of Syrene California. As the sun reaches it's final point in the sky before resting for the night the man Zolton appears.*

"Melissa, my Demoness. You okay love? You've been up here most of the day. I have some interesting news to share."

*Zolton approaches her holding a bottle and two glasses. Kneeling next to the young beauty, he grabs the attention of her eyes with a smile hidden behind his beard. A smile spreads from her eyes to her lips as she grabs Zolton in for a kiss.*

“Oh a handsome stranger coming bearing gifts. Be still my demonic heart! I was catching some rays and thinking about my recent loss. Wait. Didn't you say something about news? Pray tell, honeylove!”

*Zolton pours a glass for each of them. Setting the bottle down.*

"Well love, I've been offered a spot in a tournament in a company called Championship Wrestling Federation. I accepted the offer my Demoness."

*He pauses a moment reading her expression.*

"My first match is the twentieth."

*Zolton kisses Melissa's forehead, remained in a kneeling position. His expression turns to one of concern.*

"My apologies for that loss babe. You're still getting back into the swing of it. You injured your neck."

“Oh broadening your horizons. I do love that ambitious side to you, babe. I have never heard of them before but I shall go with you to watch you succeed.”

*She pauses briefly and playfully tucks her bangs behind her ears and smiles sweetly.*

“Oh well you know me, babe I hate to lose at anything. Talking about my neck. I could do with one of your insane massages. Now tell me about your opponent?”

*Zolton smiles placing his glass down. Rises to his feet and comes around to the back of the beautiful young woman. He places his hands on her shoulders and begins to massage her shoulders. Then down her back, then up her neck. Repeating this as he speaks.*

"Well they are a company that was around, then not, now they're back. As for my foe. He is Nathan Paradine. From Australia. Calls himself the Australian Submission Machine or something like that. He has far more experience in this business than I. But I feel as though my skill set will overwhelm him in this match. My jiu jitsu and ground grappling is technically trained more so than his."

*A look of concern is quickly extinguished by a feeling of certainty at his words. She lets out a sigh of enjoyment as she feels his hands on her. Nothing beats the feel of those calloused hands.*

“So he likes to dominate and hides his insecurities behind this submission game because that is all he has. A submission expert believes they are unstoppable once they apply those moves which gives you the opportunity to attack. He knows he has nothing else while your game is about strike and neutralize your enemy.. Mmm.. Oh that's the spot.”

*Zolton continues to rub the young woman's neck, back and shoulders.*

"Yes. I do not think his skills are as well rounded and all around as good as mine. I don't consider my size an advantage although I do have some height and weight on him. This is going to be a whole new bag of challenges for me though Melissa. I need it. To get better. And to achieve that championship glory I salivate for."

*A smile. Quick and bright. She liked this side of him and what he was doing to her neck and shoulders even more so.*

“That feels so good. I like your ambition and I like that you want to achieve such glory. Now babe I think it's time we head back inside don't you?”

*Zolton stops rubbing her shoulders and neck with a sly grin.*

"I am willing to keep this up for as long as you need me to love. But we can and probably should head inside."

*He moves around in front of her, reaching a hand down for her to use as she wished.*

"And this ambition and drive for glory has been in me all along my Demoness. I'll achieve it. Whether it is with Championship Wrestling Federation or at World Wrestling Headquarters. With you by my side of course."

*She pulls herself up by his hand and holds him tightly as a savage and sly grin formed on her full lips. She leaned in and whispers seductively.*

“When you talk about you achieving your ambitions it gets me all tingly and in the feels. Now show me how much ambition you have when we get inside.”

*She pulled away, allowing her body to sway, feeling his eyes locked on her and the demoness was calling for some sinful action. Zolton rubs his beard over his chin with his right hand as he follows the young beauty inside, eyes bright with passion. The scene fades as the door closes behind him.*

*The scene erupts into a bright light that quickly dies into an in focus field. Out in the field, a man, a tall man with long wavy hair. A thick beard. Shirtless. Muscular with tattoos from neck to waist line. He moves slowly toward the camera. One that he seems to not really care about.*

The man known as Zolton will be arriving upon the television sets of those that view Championship Wrestling Federation. The date is set, it is August twentieth twenty nineteen. Will he just be there to speak? No he has a battle. It is the first battle of the Alpha and Omega tournament. His first foe. Nathan Paradine. Who might this Mister Paradine be?

“He is a brute. Imbecile. One with a singular vision. Lack of creativity. And my first victim within the confines of another federation’s wrestling ring.”

*The man’s voice, Zolton’s voice carries across the field fluidly. His tone is of calm, yet has a bit of venom laced behind it.*

“I am Zolton. For those that do not know who I am. What I am capable of? You will soon find out. I was offered an opportunity to stamp my footprint in the company. A new company. Yet old company. New owner. Same name. Championship Wrestling Federation. I grabbed ahold of that opportunity. Therefore, in a few days time. Just a few miles from where I currently stand. I will make an example out of Nathan Paradine.”

*He continues to move toward the camera. He moves smoothly. Not looking as though he is stepping. Gliding through the tall grass and flowers that fill the field. His piercing blue eyes are almost glowing as they peer around the surroundings.*

“Mister Paradine. The Australian Submission Machine. I have faced and dealt with miscreants like you before. Ones with over indulgent and completely incorrect monikers. Hell I had to deal with my own ridiculous self given moniker. That is for a different time. This however is the right moment to describe to you how I plan on breaking you.”

A plan? Zolton, you do not have plans. You are one of chaos. Unpredictability.

*The soft female voice returns. It seems to be filling the entire field, while Zolton’s voice is focused directly at the camera.*

“Ah. Touche. I do not plan. I do not scheme. I stab needles into the plans of others to induce the chaos I seek. Nathan. You have been in this business for quite some time. I applaud you on continuing even though it seemed as though you were passed it the last time out. Your age is typical physical prime for this athletic sport. Do not think I will be underestimating what you are capable of or what you might be able to pull off when we square off. No. I am anticipating anything and everything. A craft veteran such as yourself has plenty to give and plenty of spunk. Especially when there is such a rich prize at the end of this thing. Paradine. When I do send you crying back to your students when we fight, let them know you did your best, but your best wasn’t good enough to take out the man of chaos.”

*Zolton glides to the camera. His eyes glowing it seems. Staring a hole through the camera.*

“What will happen to your immaculate reputation down in Australia when they all find out that your supposed machinery of submission skills failed. My appetite for glory is only growing. Achieving said glory begins with how you fall. This is a tournament style I am used to. Not only in the world of professional wrestling. But in jiu jitsu tournaments. Judo tournaments. Ah yes Paradine. I have skills in the submission department as well. I also have other skills that have yet to be revealed. When the sun sets. The dust settles. The smoke cleared. The outcome of this Alpha and Omega tournament will be one of glory for me. I am the Alpha. You will never be the Omega. Welcome to my world of chaos Mister Paradine. Hope you enjoy your stay. NOT!!”

*Zolton lets out a laugh that can only be described as demonic. As he does, his arms float out to his sides. The bright blue sky turns gray, then all goes to black.*