A big fucking smile on his face.

Dan Ryan:
Hiya Austin. Hiya Dick. Can I call you Dick? I see you've been poring over my tapes. That takes a lot of work. I'm impressed. Well, maybe not impressed. Intrigued. No wait... Bemused. Amused? Amused. Yes, that's it. Amused. It was a fun little program you put on there. Me, I do enjoy the classics. If I knew you were gonna come at me like it was 1999, I'd have worn my Prince and the Revolution t-shirt.

So, the old 'you were handed everything you ever got' routine, eh? That's an interesting conclusion. For someone who went to great lengths to drop little nuggets of my past into all of..... that, you sure did miss some pretty important details. Like, I don't know, how I was consistently fighting the authority in the companies I worked for? The late Chad Dupree will certainly be happy to hear that his beloved NBW is still in business, even though it closed 15 years ago and he died 10 years ago. Oh, but I know...

Who needs facts when you can fling your own shit against the wall and see what sticks. That's cool and all. Like I said. I like the classics. Just like the gay jokes. You got me! That's my problem! I'm GAAAAAY! If only I'd admit how incredibly, totally GAAAAY I am, I could break through this generic ceiling I'm under and just be openly and freely so very very GAAAAY!! March on for me with pride everybody, cuz I'm overflowing with all of the GAAAAAY! Not that there's anything wrong with that, right?

Truly, you are on the cusp of modern humor. You really got me with the clever wordplay there, with JUST enough detail to convince people who don't know any better. But here's the deal, Dickie. There are people here who DO know better.

You're also on the cusp of the most innovative methods of modern wrestling promos, too aren't you? You've got the first section where shit gets made up, then the middle 'no one cares about you' section where shit gets made up and we get a line by line reading, followed by the third section where shit gets made up with a big oaf silently standing behind you. And in case anybody couldn't tell where one section ends and the next begins, you turn the camera SIDEWAYS for the second section. This is the FIRST TIME anyone has used this style! And because you are the FIRST person to EVER use that style, it TOTALLY makes sense that you would be making fun of ME for being unoriginal -- even... ORIGINALLY... having the idea to mock an opponent's promo STYLE in the first place..... yes, so MODERN of you. NEVER BEEN DONE, I tell you. NEVER BEEN DONE.

And I mean, thanks for listing my resume'... I guess? The smarter crew around here already know it, you know. It's why I was invited and why I didn't have to bring it up myself. Plus, you know, it's tacky. I know you revel in being tacky. You get it. I mean, the outfit alone, right?

But what you don't get, honestly, is anything else about me that's real.

You go on and on with crazy talk like "some guys in a room drawing straws for who should 'go over' or carry a belt for the day."

Go over? Guys in a room drawing straws?

Why, Dick Fury, what are we even TALKING about here?

Ryan looks puzzled, confused, perplexed, pointing a finger at the camera as if solving a mystery

Dan Ryan:
Are you suggesting.... that there are professional wrestling companies that simply HAND championships to people?? That a group of people get in a room and talk to each other, maybe on the phone or even some electronic means like email or even Skype or something, and just DECIDE who should be champion???

I suppose next you're gonna tell me they just go out to the ring and put on some sort of predetermined show, an athletic display of showmanship that is not so much competition, but sports related performance art, and they aren't trying to really hurt each other at all.

I just can't accept that. 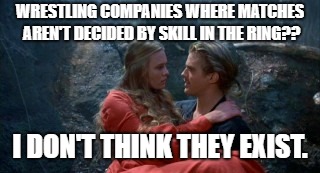 Dan Ryan:
No, I REFUSE to accept it.

Ryan waves his hands in front of him as if clearing the air.

Dan Ryan:
And, now that you mentioned it, my assistant just passed me a note asking... how I knew you said any of this. He said... he watched your promo and didn't see mention of any of this stuff. I mean... I don't really know.

Dan Ryan:
It just popped into my head. Somehow, instinctively, I felt as though... these topics were narrated straight into my skull, and I felt compelled to respond.

(No, I mean, seriously, I've never seen the "narrator says shit you can't respond to" trick, ever. I had no idea how to respond to that. hashtag-so-original-hashtag-sarcasm-hashtag-a-derrrrrrr)

Dan Ryan:
OUT OF MY HEAD, YOU DEMON!

Ryan's face goes from one of barely contained panic to one of complete stoic indifference.

Dan Ryan:
Still, I can't help but wonder if there's something more to this. Clearly, you've both heard of me. You might say you haven't, but clearly you have. You recognized the need to do some surface study of my career -- where I've been and so on. Or at least, you called up the office for a cursory print out of my official bio. You know, since it's ALL there.

Dan Ryan:
You said it yourself. Bubba Love? Ouch. Yeah, I get that. But this... ain't that. You know what's up. Beneath the bryll cream and bad skin, Dick, you and Austin know that this week will be quite different. You know. You're cocky. But you know. Hey, I'm cocky too. I'm cool with it. I'd be embarrassed for you if you were all slobbery about who I was and what I've done and where I've been and when I did it...

Dan Ryan:
And why I did it.

I appreciate you coming at me... hard.

Ryan withholds a chuckle, and he withholds it SO much better than Dick Fury ever did.

Ryan waves with an "oh you" wave of his hand.

Dan Ryan:
We stopped using bayonets my rookie year in the sport, you silly goose. We use flint-locks now.

But don't worry. I'm totally up for giving you what you want. You want some sort of... challenge.. some sort of.... what the french call.... je ne sais quoi-lity. And I will be MORE than happy, in whatever language or ridiculous outfit you and your disciple choose, to challenge you. I'll gladly break your silly little neck, and give you all the time in the world to ride out that contract. Embrace it. It's the smart choice really.

And you guys are super super smart, so I know it's what you'll do.

And, you know, I know what I'll do too. Be ready though. I'm a little crazy, and super unoriginal. The whole... beat you and move on, never to think one second about you ever again thing.... it's been done. So boring, just beating people up, winning matches, winning championships. Yep, super super unoriginal.

Ryan's arm stretch wide, a smile on his face.

Dan Ryan:
I guess unoriginal is just gonna have to do.