It's almost time for Golden Intentions!

We open with a panoramic view of Philadelphia, PA - fading to close ups of the Liberty Bell, the Ben Franklin Bridge, the port, and more philly bros eating cheesesteaks than you can count.

Finally, we end on the Wells Fargo Center, before fading in to...

Angus: Ladies and gentlemen, boys and girls, do not adjust your screens! My name is Angus Skaaland and this is CWF Uncut with Angus Skaaland?

Adrian: Uh, Angus? I believe this show is called Church vs State.

Angus looks at him, dead - eyed.

Adrian: Ladies and gentlemen, Mr. Church and Mr. State were unable to fulfil their duties today, and Mr. Skaaland and myself were asked to fill in on short notice. I don't know what I did to offend the top brass, but I assure you, I've paid for it. However, despite our presence, this show is, in fact, called Church vs State: Golden Intentions edition. 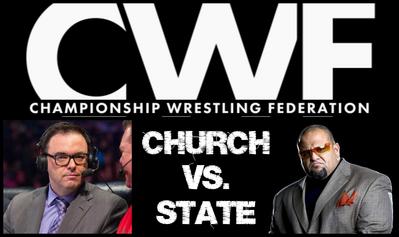 Angus: You don't know a gorram thing about branding, do you?

The logo fades from the screen, and behind Angus and Adrian, a video wall lights up with the GI banner, fading to a graphic for the first match.

Adrian: Kicking things off will be a lumberjack match between Forsaken member Mia Rayne and Ouroboro member Cassandra. Both of these women have shown a willingness - even an eagerness - to amp up the violence. When you add in the lumberjacks, and the explosive potential of Forsaken and Ouroboro clashing on the outside of the ring, I think it's safe to say we'll be starting off Golden Intentions with a bang!

Adrian: Don't call me that.

Angus: I think this match will set the tone for the night; at the very least it'll set the bar pretty high for what these athletes will do to win a match. The real wild card will be, win or lose, what shape will Mia Rayne be in for the rest of the night?

As Angus finishes, the logo shifts to the Paramount Championship.

Adrian: Coming up on the heels of that monster opener will be a rematch months in the making, as Christian Starr tries to take back the Paramount Championship and avenge the first loss he took in this company against current Champion and CWF legend Jarvis King.

Angus: Not to mention, they're already known to be numbers one and two entering Golden Intentions: there'll be plenty of time to punch each other in the face without a championship hanging in the balance.

Fade out, and fade in on Ataxia and Silas Artoria, the Impact Title, and a cage.

Adrian: We've got another rematch for another Championship up next, as Ataxia, representing the Forsaken, defends his title in a steel cage against Coalition member Silas Artoria.

Angus: Is the Coalition even a thing anymore?

Adrian: ...That's a good point, Angus. However, Coalition or not, Forsaken or not, the cage will ensure that this match take place with no interference and no shady dealings. We will have a decisive winner.

Angus: Ataxia's been on a roll since winning that title, and the Forsaken have really come around as possibly the premier group in the CWF right now, while Silas Artoria has been on something of a downward slide since Paradise. I think that on paper, this match is either man's to win, but at the same time neither can afford to... come up short.

Rolling his eyes, Adrian stands on his chair and points at Angus.

He returns to his seat, Angus looking equal parts worried and amused. The graphic switches to the Tag Team Championship, along with Smokin' Aces on the left and the Forsaken on the right.

Adrian: I have to say, this is the match I'm looking forward to the most. Four of the most dominant athletes in the CWF right now, in the ring at the same time, going to war over the CWF World Tag Team Championships. Smokin' Aces are clearly the team to beat at the moment; not only are they the actual Champions, but Duce Jones and Freddie Styles have been wrestling at the top of the card for a good six months, always in title contention, with Duce having defeated Harley Hodge for the Championship during Modern Warfare.

Angus: They certainly have been. At the same time, The Shadow is teaming with Mia Rayne, and I have to wonder what sort of condition Mia will be in after her Lumberjack match.

Adrian: You make a good point, Angus. Either she'll be in no condition to wrestle a second match, or she'll be so energized and amped up that she could hold her own on adrenaline itself. It all depends on the Lumberjack match.

Angus: This will either be a knock-down, drag out from start to finish, or a gorram massacre. Either way, I'm glad I'm not in the middle of it.

The tag team titles fade away, to be replaced by Caledonia, Amber Ryan, and Omega.

Adrian: And this is the big one: the Malice in Wonderland match for the CWF World Championship. All three of these women have been on a roll in the past few weeks. Amber Ryan announcing her intent to cash in her guaranteed title shot at Golden Intentions was a kind gesture to an old friend, but their insistence on Omega's entrance could very well spell the end of Caledonia's title reign.

Angus: Especially with this Malice in Wonderland stipulation. I think it's safe to say Caledonia is second to none when it comes to a wrestling match, the type of brawl that this is gonna likely turn into really favors the gives-no-damns attitude of Amber and Omega.

Adrian: Omega certainly is the wild card in this match. Between Amber Ryan and Caledonia, however - the question becomes, can you injure your friend to the degree that you'll have to in order to win? Both women can, but I wonder if Caledonia will.

Angus: She's going to have to, otherwise she'll quickly be cut down to size.

No sooner does he finish talking, than Adrian hops off his chair, walks to him, and kicks his shin as hard as he can.

Angus: OW! What the crap? I was talking about the glass, not you, you bitter little man!

Adrian returns to his seat.

One more transition, from the World Title match to the Golden Intentions Battle Royal and a graphic of all of the participants.

Angus: Maybe to you.

Adrian: Of course, the main event of the evening is the Golden Intentions match itself. We still don't know the order of entry for the most part, so this one is up in the air on all sides!

Angus: Well, we know a few. Christian Starr and Jarvis King are entering at one and two, and coupled with their match earlier in the night I think they've got virtually no chance. Duce Jones, on the other hand, coming in at number thirty...

Adrian: That's another thing to consider, yes. Aside from Ms. Rayne and, for obvious reasons, the three women involved in the World Title match, every other athlete with a prior match is going to be in Golden Intentions. This leads to obvious disadvantages to men like Starr and King, and Duce Jones coming in last, depending on how things go in the Tag Team Championship match, that advantage may very well be nullified.

Angus: Not to mention, who's to say Cassandra will even be able to compete? Who knows what kinda shape Ataxia or Artoria will be in after their cage match? These types of wars are draining on a normal day; adding in a no-holds-barred fight with thirty psychopaths is not my idea of a good time.

Adrian: You may have a point, but there's also the fact that all thirty... psychopaths... will have twenty nine opponents to contend with. I don't think it's reasonable to count anyone out, though clearly King and Starr have the biggest hurdle to overcome based on placement alone. Cassandra could be put through the ringer, for example, in her match against Mia Rayne, draw number twenty nine, and, depending on who's thrown whom over the top, have to survive merely six minutes to win. We'll just have to wait and see.

Angus: These guys with their prior matches, their best strategy is to hang out under the ring until a partner or friendly face comes in.

Adrian: Under the ring?

Angus: You said no rules. No rules means no rules.

Adrian: That's... technically true. Still, can you name a single wrestler who would hide under the ring just to give himself a better chance to win?

Adrian: I'm not surprised. But let's put you on the spot, Angus - who's your pick to win?

Adrian: This is supposed to be an impartial discussion, Angus.

Angus: Yeah, like you don't have fifty bucks on MJ Flair.

Angus: I thought so.

Adrian: I'm looking forward to a hard fought match with a deserving winner.

Angus: Yes, because that happens all the gorram time in this sport.

Adrian: Anyway, this is the part of Church vs State where we're supposed to have a few questions for some of the event participants, but since this was a last minute fill - in for Mr. Church and Mr. State, we have nobody to speak with, and unless you have anything else to add, Angus?

Adrian: ...about the event?

Angus: I think we've said it all.

Adrian: Then the only thing left to say is thank you for joining us, and don't miss Golden Intentions, June 23rd, 2018, only on Pay Per View and Slack!